The S2F.PORT 2.0 is a protocol converter that can be used to integrate both S.Port and SBUS signals, and translate into multiple F.Port 2.0 signal outputs for controlling up to 8 F.Port 2.0 capable servos simultaneously. By pairing it with an SBUS and S.Port capable receiver, the telemetry feature (current, voltage, etc.) of the connected Xact servos now provides feedback to the radio thanks to the F.Port 2.0 protocol. Another convenient power feature is all the channels, including S.PORT and SBUS channels, can be powered by powering either servo channel when JP port is short-circuited.

Q: How to use a stand-alone power supply to power the system (servos, receivers, and converter)? 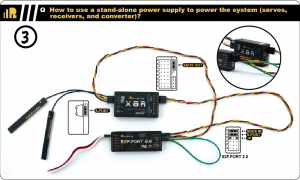